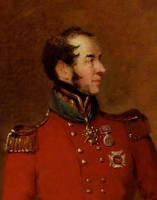 The first Baron (Lord) Harris bought Belmont Faversham in 1801 with his reward for winning the Battle of Seringapatam India.  His son the 2nd Lord Harris (1782-1845) at the age of 16 distinguished himself by his bravery in this battle.  William George Harris (2nd Lord) travelled around the world from the Cape of Good Hope to China and India.  He returned to Europe fighting at Strahlsmundand and Golinde with distinction.  He fought with Wellington in Flanders.  In 1815 He commanded the Black Watch at Waterloo showing considerable bravery and was shot through the shoulder.  He stepped into a breach saying “Well Lads if you won’t I must”.  He was presented with a ceremonial sword by his comrades for his conduct in the battle.  Twice shipwrecked, he saved three men from drowning by diving and rescuing them. Major General 1821, Lieutenant General 1837, he became Colonel of the Blackwatch - his old regiment.